Abstract:
Unconventional superconductivity and in particular spin-triplet superconductivity has been front and center of topological materials and quantum technology research. We report our observation of triplet pairing in nonmagnetic CoSi2/TiSi2 heterostructures on silicon. Epitaxial CoSi2/Si (S) undergoes a sharp superconducting transition at a critical temperature K, while TiSi2 (N) is a diffusive normal metal. We investigate conductance spectra of both two-terminal CoSi2/TiSi2 S/N contact junctions and three-terminal T-shaped CoSi2/TiSi2 superconducting proximity structures. Below Tc, we observe (i) a narrow zero-bias conductance peak on top of a broad hump, accompanied by two symmetric side dips in the S/N contact junctions, (ii) a narrow zero-bias conductance peak in the T-shaped proximity structures, and (iii) hysteresis in the S/N junction magnetoresistance. These three independent and complementary observations point to chiral p-wave pairing in (CoSi2/Si)/TiSi2 heterostructures. We note that (ii) explicitly signify an anomalous proximity effect due to the penetration of odd-frequency spin-triplet even-parity Cooper pairs from CoSi2/Si to TiSi2. The zero-bias conductance peaks are found to be more pronounced if TiSi2 is made more diffusive (i.e., weakly disordered). 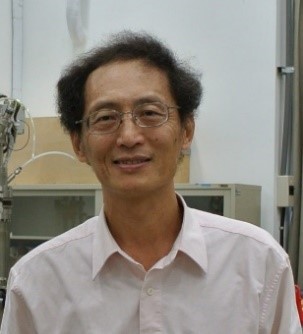 Professor Juhn-Jong Lin（林志忠）obtained his BS degree from the Department of Electrophysics at National Chiao Tung University in 1979, and his doctoral degree from the Department of Physics at Purdue University in the USA in 1986. He was a postdoctoral researcher at University of Michigan—Ann Arbor (1986–1987), and at University of Virginia at Charlottesville (1987–1988).
Professor Lin joined the Department of Physics at National Taiwan University as an associate Professor (1988–1992), and then as a full professor (1992–1997). He moved to National Yang Ming Chiao Tung University (NYCU) in 1997, and is currently a distinguished professor in the Department of Electrophysics at NYCU.
Professor Lin’s research focuses on the areas of low-temperature condensed matter physics and electronic transport in solids. His study subjects include mesoscopic physics, quantum transport, electron dephasing, Kondo effect, and unconventional superconductivity.